UPDATE: Scroll to the bottom for info on trade paperbacks.

So I’ve been sitting on lots of individual back stock of my single issues for some time now. I tend to sell fewer and fewer singles when I attend cons (focusing on trades), so I thought I’d bundle them up in lots and offer them for sale at very reasonable prices. Too cheaply, probably, but I’d rather have people read the books than sit in my office for eternity.

Some of these sets are a limited, but I’ll take them down when I run out. If you see a set here, assume it’s still available. I’ll autograph each issue. Please let me know if you want the autograph to be written to you (or to anyone in particular). If you want a sketch by the writer, let me know. I’ll throw that in, too.

Here’s what I have: 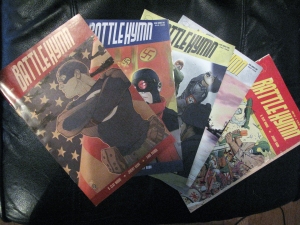 Five issues. Jeremy and I are in the process of working up two sequels to BATTLE HYMN, which is one of my most asked about books. Golden Age madness. 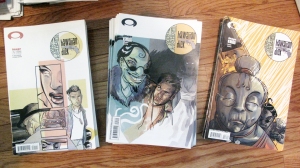 The original HAWAIIAN DICK series. Three issues. Most of the copies I have of the first issue are clean, with smooth covers and all, but there may be a slight split at the spine, which is why these are priced so cheaply. I don’t see these a lot. The initial print run sold out quickly. 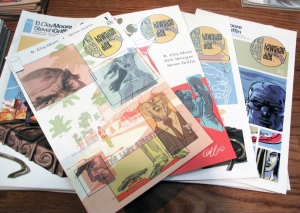 Four issues. I have a few issues of number two that are also autographed by Nick Derington, which I’ll send to the first few people who order. Multiple Eisner nominations for Steven on this one. 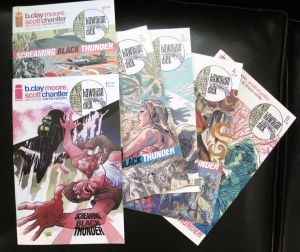 Five issues. This one has yet to be collected into trade, so this is the only way to read it. The first issue had two covers. One by Steven Griffin and one by Jason Latour (who just wrapped up a killer Vertigo OGN and an amazing DAREDEVIL BLACK AND WHITE story). If you have a preference, let me know.

THE EXPATRIATE (2005) (Image Comics) by B. Clay Moore and Jason Latour

Four issues. Latour and I would love to revisit this someday, but if you’re in the mood for a twisted piece of sixties spy-fi, this is your book. I just remembered that the first issue was previewed in THE WALKING DEAD. The first issue sold out in five hours, and we underprinted it. Not a lot of copies out there. 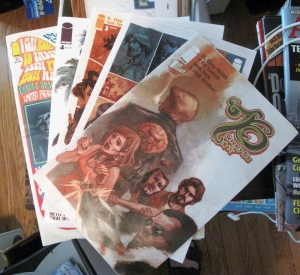 Five issues. And it looks as if the rest will be collected in a trade with these five instead of individually due to any number of messed up circumstances. This book has a really small but really devoted following, and I love it. Seventies street action. Two stories: Jackie Karma (by Ed and me) and Cool (by Seth and Tigh). 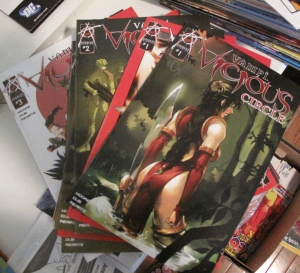 Three issues. The first work-for-hire I ever did. I recently reread this for the first time in years, and I have to say I really like the story. I rarely see this one at cons, although it sold pretty well when it was released.

I don’t have a ton of trades on hand, but I’m willing to offer what I do have for those who would rather go that route. The HAWAIIAN DICK trades are absolutely loaded with extra features, mainly created by artist Steven Griffin, and the BATTLE HYMN trade contains background info and all five issues of the original series.

Drop me a line for Paypal info and to send me your shipping address (put BCM BOOKS in the subject line):

Also let me know if you just need a single issue of something. I’ll ask you to include $2.00 per set for shipping, and I’ll bag ’em and do my best to make sure they don’t get all bent out of shape during shipping.

Ben Stein: “The people who have been laid off and cannot find work are generally people with poor work habits and poor personalities.”

Jesus Christ. Seriously, Ben? Does anyone need more proof that some of these sons of bitches are so entrenched in their ivory towers that they have zero ability to connect with actual flesh and blood human beings? To bastards like Ben Stein the average person is an abstract concept. Real human existence is beyond their comprehension, and dismissing a massive chunk of the population with one casual swipe of an entitled hand is no more difficult than firing a pool cleaner.

I’m very close to abandoning all public discussion of politics, but this level of insensitivity was too much for me to ignore. Fuck, you, Ben Stein. All of your notoriety stems from your ability to channel a lack of personality in one fondly remembered slice of 80s nostalgia. Your background as an economist impresses no one, and when you’re sitting in the Screen Actors Retirement Village, the staff will only accommodate your desire for a second prune danish if you agree to cut through your dementia long enough to mutter “Bueller? Bueller?”

That’s your legacy. One line in one movie. And it’s afforded you enough attention to allow you to parade your ignorance and insensitivity in front of every bored American clicking through AOL’s “news” items on a humid Tuesday evening.